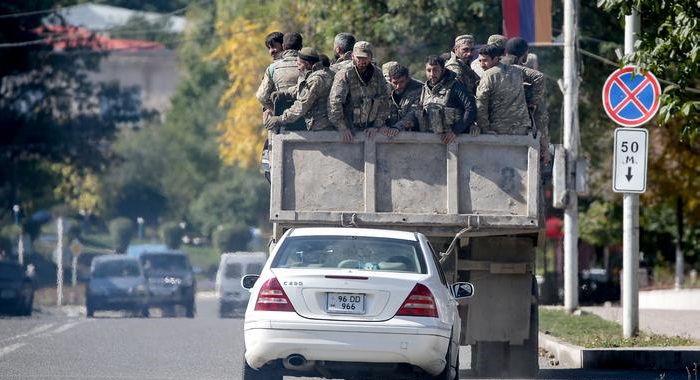 Azerbaijan on Wednesday claimed that it hit two missile launch sites in Armenia, amid a bout of fighting over the the disputed Nagorno-Karabakh regions.

Azerbaijan claimed that a ballistic missile system and a rocket system at the sites were targeting civilian areas.

Armenia's defense ministry confirmed that sites within Armenia had been struck.

It says it "reserves the right to target any military installations and combat movements on the territory of Azerbaijan."

A cease-fire between the warring neighbors was agreed Saturday after 10 hours of talks, brokered by Russia.

Both sides have since claimed the other has violated the agreement.

Fighting broke out on September 27. Since then, more than 400 people have been killed in fighting over the contested region. Nagorno-Karabakh is officially part of Azerbaijan, but under control of ethnic Armenian forces backed by Armenia since the end of a separatist war in 1994.

Russian Defense Minister Sergei Shoigu appealed for the Azeri and Armenian defense ministers to "fully meet the commitments" of the humanitarian ceasefire.

The missile launch systems were deployed in areas of Armenia bordering the Kalbajar district of Azerbaijan in the Nagorno-Karabakh region.

The first launch site was aiming at the Azerbaijani cities of Ganja, Mingachevir and other populated areas, claimed the Azerbaijani defense ministry. There was no civilian infrastructure nearby, added officials.

"The attack was carried out based on the mere assumption that the subject equipment was allegedly going to strike at Azerbaijan's civilian settlements," defense ministry spokeswoman Shushan Stepanyan said on Twitter.

Throughout Wednesday, both Azerbaijan and Armenia claimed the other side was violating cease-fire terms and engaging in provocations. Azeri President Ilham Aliyev Wednesday said that Azerbaijan was continuing a military operation to free territory in Nagorno-Karabakh, Russian news agency Interfax reported. Azerbaijan also accused Armenia of trying to attack its gas and oil pipelines.

Defense officials in the enclave said their forces had shot down an Azeri Su-25 fighter jet but Azerbaijan denied this.