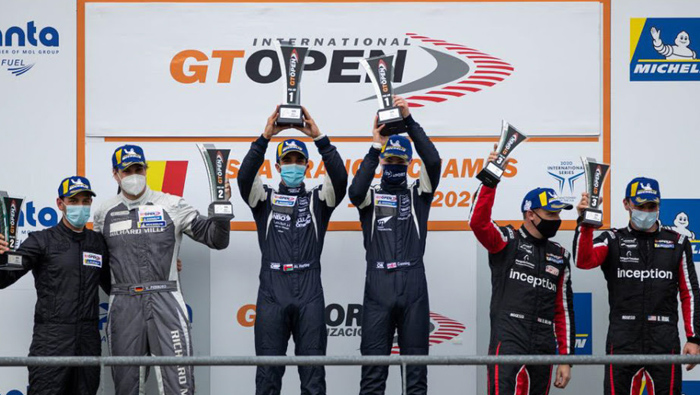 Muscat: Ahmad Al Harthy and Tom Canning made an absolutely dream debut at the International GT Open at Spa-Francorchamps in Belgium on Saturday, October 17, with a truly sensational Pro-Am victory for Oman Racing and a richly deserved top three finish overall in race one of the weekend.

Bearing in mind Al Harthy has been away from the race track since March due to the impact of the global COVID-19 pandemic, with his last race actually taking place a full 12 months ago, the Omani’s performance really was nothing short of remarkable.
Taking the second stint of the 70-minute race, Al Harthy joined the track in fifth overall and third in Pro-Am following the mid-race pit stop – Canning having qualified a superb second fastest overall and on the class pole – and went on to deliver a star drive in the No.97 Aston Martin Vantage GT3.

“What an amazing result”, said an ecstatic Al Harthy, “I’m so proud of everybody, the guys at TF Sport who run the car and the amazing job Tom [Canning] did in qualifying and the hard work so many people have put in behind the scenes to enable us to be here this weekend at Spa. I want to say a massive thank you to everyone who has done so much to make this happen.

“It really was a great race, Tom had a very solid stint in his first ever GT3 race and when I got in the car the focus was to put our head down, concentrate as hard as we could and race well. It felt so good to be back and I’m so proud we were able to be this competitive after so long away. To take the Pro-Am win, and a double podium, with such a smooth, clean race is, honestly, amazing.”
Canning took driving duties for the race one qualifying session on Saturday morning and delivered an absolutely sensational performance. Third fastest overall when the session was red flagged with just under 10 minutes remaining, after the resumption the Briton pumped in quicker and quicker times.

Ultimately ending the session second overall with a lap of 2m14.783 seconds (187.0 km/h), just 0.178 seconds shy of the outright pole position on his maiden qualifying run in a GT3 car, Canning did secure a memorable Pro-Am class pole.
Starting the afternoon’s 70-minute encounter in the No.97 Aston Martin Vantage GT3, Canning’s first race at GT3 level, he was edged back to third into La Source and after being held wide on the exit the lost momentum dropped him to fifth overall and third in Pro-Am.

With around 40 minutes remaining, the mandatory driver change pit-stops started but Canning stayed on track and moved up into third overall as a result. He eventually pitted at the end of lap 18 to hand over the Aston Martin to Al Harthy.
Joining the race with around half an hour on the clock, the Oman Ministry of Culture, Sports and Youth, National Bank of Oman, Omantel and Barr Al Jissah supported driver held third in Pro-Am and fifth place overall.

Smartly passing the Ferrari F488 of Angelo Negro on lap 19 to climb into fourth and second in Pro-Am, Al Harthy quickly closed down the gap to class leader Brendan Iribe and on lap 22 he produced a beautiful pass around the outside into the Bus Stop to brilliantly take the Pro-Am lead.
Running in third overall, Al Harthy managed to keep advancing ‘Pro’ driver Henrique Chaves at bay until lap 24 when the McLaren was able to move past. The focus though, of course, was Pro-Am and with just over 10 minutes to go the Oman Racing car led the class by almost seven seconds.

As the laps counted down, the Pro battle ahead between the second placed Bentley of Yannick Mettler and Chaves’ McLaren delayed both and Al Harthy closed back in – just a few tenths of a second splitting them. On the penultimate lap of the race the Omani passed Chaves for third overall into the Bus Stop and he held it to the flag on lap 30 to cap a sensational debut in the championship.

“This weekend is such an important one for Oman Racing, it’s been the perfect opportunity to work with Tom for the first time before we race in the Asian Le Mans Series in January”, added Al Harthy, “All our focus now is on race two here at Spa, it will be a harder race for sure but we’ll try and do the very best we can. International GT Open is a great championship, I’m really enjoying it.”
Al Harthy will take qualifying duties in this morning’s race two session, which begins at 09.40 (local time), with the weekend’s second encounter following at around 13.50 (local time).