What airport reopening means for Oman’s tourism in the future

Reopening of Oman’s airport marks another step towards bringing a little more normalcy back to life in the country.

Although tourists aren’t being allowed in just yet, the reopening of the airport does provide hope among travel operators in the country. Tourism contributed more than OMR 700 million to the country’s GDP in 2019, an increase of four per cent when compared to the previous year.

Having been earmarked as one of the primary areas of expansion under the Sultanate’s Tanfeedh programme for economic diversification, Oman aims to bring more people into the country to witness its stunning and diverse natural beauty.
Welcoming tourists back into the country will take some time, owing to the COVID-19 pandemic, but the growth tourism has shown in the last few years provides an indication of how it will develop in the future.

Inbound tourist numbers have grown by nearly a million between 2015 and 2019, rising by 33 per cent from 2.63 million to 3.5 million during that period. Tourists are also spending more time in the country: the average number of nights spent per tourist rose from 6.9 to eight, while the total number of nights tourists stayed in the country jumped from 13.1 million to almost 20 million.

In his organisation’s recently released tourism report for 2019, Dr Khalifa Al Barwani, the chief executive of the National Centre for Statistics and Information, said the efforts to expand the country’s economy were “within the framework of the efforts made by many countries of the world, including the Sultanate, to avoid the negative effects resulting from fluctuations in international oil prices and their impact on their economies, through their efforts to search for alternative and safe sources of income for their national economies. 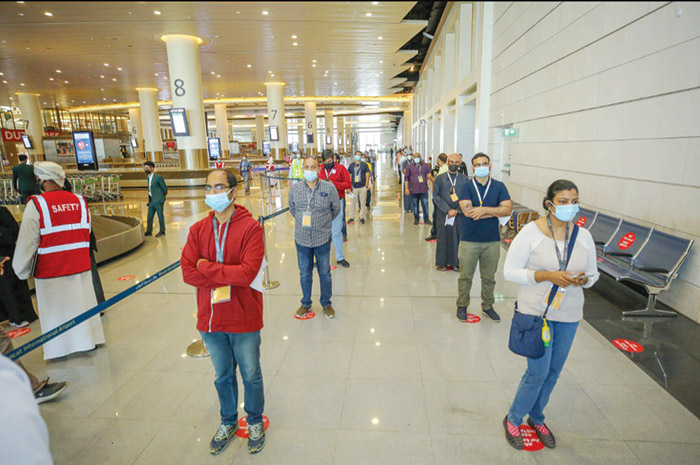 Tourism expenditure has also come close to doubling during this period, rising from OMR 364 million to OMR 684 million over the past five years: an 87 per cent increase in spending. The willingness of the average tourist to spend more is also encouraging for the future. In 2015, the average single tourist spend was about OMR 138, while his 2019 counterpart shelled out close to OMR 200.

While development in the tourism sector has brought steady results, the report notes that more needs to be done to increase its contribution to the country’s economy.

Oman has previously planned for the tourism sector to employ half a million people by 2040, as part of its efforts to increase its share to the GDP to about six to 10 per cent, which is closer to the amount this sector contributes around the world.

“If the government wants to attract visitors to the Sultanate at higher rates, it should make more efforts to upgrade the tourism sector and continue to develop its infrastructure as a promising and reliable source of income in the gross national product, in addition to targeting new markets and marketing the Sultanate as a safe and diversified tourist destination,” the report reads.

The reopening of the airport has made hotel owners very hopeful that tourists from overseas will be allowed to visit the country. Many tourist establishments, since they were allowed to reopen following the lockdown which was instituted to reduce the number of infections in the country, have had business from people within the country.

“Oman’s hotel offerings have really expanded and improved over the past few years,” said Firas Rashid, director of sales and marketing for Kempinski Hotel Muscat. “You have options for all travellers who wish to see the country, and in all areas of the country.

“Resorts are spread about in places like Jabal Akhdar, Al Ashkarah, Salalah and many other places. Many of these were not there earlier, so the government is definitely putting a lot more emphasis on tourism,”  he added.

“We have been looking forward to the reopening of the airport as well, as it is a significant step in the resuming of tourism activities in Oman,” said Firas. “We are awaiting further instructions from the Supreme Committee to deal with COVID-19 regarding accommodating more guests in our hotels.”

As part of its efforts to encourage more tourists to come to the country, which will be rolled out in parallel to more COVID-19 restrictions being lifted globally, many hotels have created back to business plans that target countries from which large numbers of tourists come to Oman.

Domestic tourism represents phase one of this plan, while encouraging regional tourism is the second. The third phase depends on countries from which flights are allowed into Oman. Among Oman’s primary sources of tourists are the other Gulf Cooperation Council countries. Nearly 40 per cent, or 1.4 million of the 3.5 million tourists who came to the country last year were from the GCC.

Oman is one of the six members of the GCC, which includes Saudi Arabia, the United Arab Emirates, Qatar, Bahrain and Kuwait.

Ih this in mind, we are currently performing maintenance checks on all the areas in our hotel: our restaurants, gym, pool, all the common areas that are likely to be used by our guests,” Firas said.

There is, of course, one condition needed for all of this to happen: “All this depends on the vaccine for COVID-19 being produced, so that our lives can return to normal.”
– [email protected]